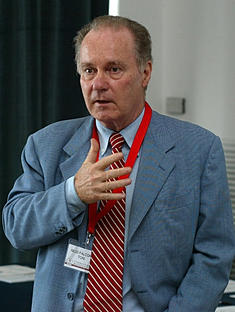 Since the inception of his career, Muzi Falconi has operated in the field of professional Public Relations. His career began in 1961 as employee communication editor for Stanic (an Eni/Exxon joint venture), continued as press attaché and, subsequently, Public Relations manager of 3M Company in Italy from 1963 to 1970.

In 1971 and 1972 he was economic and financial reporter for the national newsweekly L’Espresso and editor-in-chief of the monthly Photo 13 Italiana.

From 1972 to 1974 he was Director of Communication of Fabbri Editori, then Italy’s largest publisher.
He founded MF Communications in 1974, and merged it into the newly formed SCR (Strategy, Communication, Research) Associati in 1976.

SCR quickly grew to become Italy’s largest and most prominent Public Affairs and Public Relations consultancy.
In 1990 he sold SCR to Shandwick plc (today Weber Shandwick) and remained on its board of directors until 1994.

From 1994 to 1996 he founded and developed On-Off, a consultancy boutique specialised in assisting organisations to understand and cope with the management impact of technological convergence (computer, television, telephone). On-Off subsequently merged with Methodos in 1996.

Muzi Falconi was President of Ferpi, the Italian Federation of Public Relations from June 2000 to June 2003, and in July 2002 he was elected founding Chair of the Global Alliance for Public Relations and Communication Management, a position held until December 2003. The Global Alliance, initially formed by 24 national associations, now has 70 members representing in excess of 180,000 professionals.

During his Chairmanship of the GA, he was directly responsible for organising the first World Public Relations Forum, held in Rome in June 2003 with 600 participants from 32 countries, dedicated to discussing and adopting the GA’s Global Ethics Protocol.

As past Chair, he was also entrusted by the GA to organise the Second World Public Relations Forum, dedicated to the issue of communicating for/with/in diversity, which was held in Trieste June 28-June 30, 2005 with 584 participants from 40 different countries.

More recently he actively participated in the formation of the Melbourne Mandate, discussed and approved in November 2012 at Melbourne’s Seventh World Public Relations Forum.

Muzi Falconi was granted Honorary Fellowship of the UK’s Chartered Institute of Public Relations and in June 2005 received the Alan Campbell Johnson Medal for outstanding contribution to International Public Relations. In March 2009 and again in 2010 and 2011 he organised and was main lecturer at the Public Diplomacy and Public Relations intensive course for diplomats in Rome, promoted by the Ministry of Foreign Affairs.

In 2012 he was inducted in the Hall of Fame of the Reputation Institute.

On October 13 2014, the opening day of the PRSA’s international conference held in Washington DC, he is to be the first non-American to present the 7th annual Grunig Lecture organised by the University of Maryland.

Mr. Muzi Falconi often writes on the subjects of communication and public relations social, economic and political issues in relevant websites, newspapers and magazines. In Italian, mostly at Ferpi and HuffingtonPost and in English, in PRConversations.

He is author of:

Co-author of the Italian chapter of The Global Public Relations Handbook, Routledge, edited by Krishnamurthy Sriramesh and Dejan Vercic 2009.

Author, with Fabio Ventoruzzo, of In Che Senso: Cosa Sono Le Relazioni Pubbliche (In What Sense? What Public Relations are), Luca Sossella Editore 2008.

Author of the chapter dedicated to the Stockholm Accords in Introduction to Public Relations (edited by Sue Wolstenholme) Pearson 2013.